After taking last week off to let some others get games in, I was ready to play again this week. My opponent for the night was Sprocketgx, whom I have played (and lost to) on many occasions. This would be our first game of CHA against Tunguska, and I was looking forward to it. By random draw, our mission for the week was Firefight. After getting the table set up and armies unpacked, we rolled WIP and got into it.

Our table had a nice mix of natural features and buildings. I could see this being an industrial complex that is building up in a heavily forested area. The catwalk down the middle set up some nice line of sight breaks from the sniper levels and the ground. I chose the side with the taller buildings, since this was Firefight, I wanted my lieutenant to be as difficult to access as possible.

Sprocket brought 8 of the 45th Highlander Galwegians to the table, these were spaced fairly evenly across the front line. McMurrough, Wallace and a Volunteer link team supported his left side. He also had a Cataran Sniper covering that side as well. The right was more open and covered only by a Motorized 112. Across the middle was a Scots Guard, S.A.S. and Uxia from his right to left, each near one of the Panoplies.

I set my Hollow Men link on my left side, with a Combi and the Missile Launcher up high, and the Spitfire watching the forward approach down low. The Stempler and other Hollow Man Combi were tucked out of the way on my right. I had my Interventor LT hidden prone on top of the building on my right, being guarded by a Heckler Jammer. I had my Zondnautica deployed dismounted with the Zondmate forward on my right side, and then deployed Persues prone on the tall building. As we got started I declared Persues my data tracker. The Grey was the datatracker for SprocketGx. 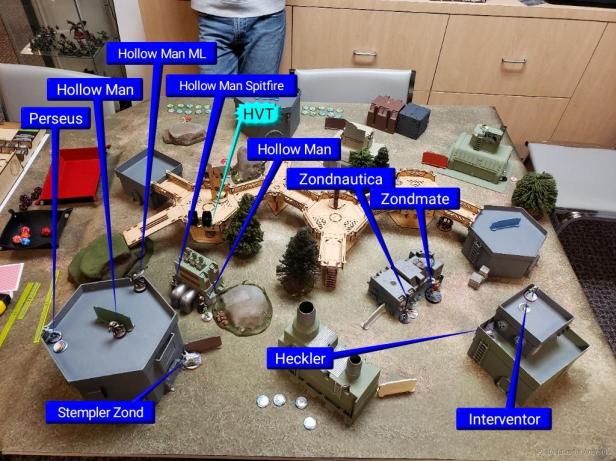 To start things off, the Highlanders all start running forward. Between my Missile Launcher Hollow Man, Spitfire, and the Stempler all take out a few of the Galwegians. Some are not available to shoot, one gets it’s smoke off and another goes dogged. After getting a smoke screen setup McMurrough comes over and snags a Multi Sniper Rifle out of the Panoplies.

After that he started to move his Volunteer link, unfortunately the Grey passed in front of my Hollow Man Spitfire and went down to a hail of bullets. After losing the Grey, a Galwegian in Dogged comes forward, pulls a motorcycle out of the Panoplies.

Before coming around the corner to take out my Zondnautica. A camo grey comes forward and does a wound to my missile launcher Hollow Man, before going down while trying the spitfire. That done he ends his turns and pulls of all the Dogged Galwegians off the table.

On this turn, I know I want to take out the 112 to keep the medic from getting up and maybe take out all the Volunteers. I start by having Perseus stand up and walk to the edge of the building. With no AROs declared he jumps off the back of the building, and spends a couple orders getting up next to a building where I can have him take a shot at one of the remaining Galwegians. The Galwegian successfully smokes and then I use that smoke screen to walk Raul Spector in. Spector walks over and shotguns down the 112 in the back before setting up a mine. Out of orders I end my turn.

The last couple of the Galwegians come forward. Both coming after Perseus. The first one I dodge away from, I am concerned about the berserk after a chain rifles just taking out my Myrmidon. The other one Perseus is able to gun down. After a couple turns of dodging, the Galwegian on my left by Perseus gets hit with a Spitfire, before going down to Perseus’s blade. After losing his models on that side to Perseus, Sprocket starts sending some volunteers after Spector. He loses a couple, but is eventually able to take Spector down. An SAS comes forward and takes something out of the Panoplies. After that McMurrough comes up to Coup de Gras my Zondnautica and Zondbot. While doing that my heckler jams McMurrough successfully. As a final act, the Cataran reveals and takes a shot at my Hollow Man link leader. Unfortunately the Cataran gets Crit off the table.

Out of orders, Sprocket ends his turn.

With my Hollow Men more free to act, I spend some orders repositioning to take down the SAS, then kill the unconscious Scots Guard. I then spend a few orders exchanging fire with McMurrough before he falls prone. Out of options I end my turn.

McMurrough being prone has to stand and walk towards the ladder with the Heckler up top. He goes down to a combination of Missile Launcher, Spitfire and Combi shots. Sprocket then forms a new core of Volunteers and Wallace and then advance up to open a Panoplie. Unfortunately Wallace is visible to the Missile Launcher and goes down, taking out Uxia as well. Out of orders and units, Sprocket ends turn.

Looking at the board, I have more specialist kills, lieutenant kills, have killed more army points and completed a classified and killed a data tracker. I end my turn without spending an order which makes it a:

This is a game that I felt like everything went my way. There were a couple of exchanges where the odds didn’t look great, but a lucky critical hit turned the game my way.

Perseus is definitely one of my favorite units in Tunguska. Lately he has been performing well above what I need him to do. In this game he took out two Galwegians, completed a classified and set up successfully for Spector to come in and tear up the back line. The real MVPs are the Hollow Men link team. Their AROs were wicked this game. They frustrated Sprocekt at every turn. I look forward to learning more about how Tunguska functions, I think I am starting to get a knack for it.