This game is a special one. While it is only my 42 game, it represents one year of playing infinity and writing up my battle reports. For a game on a day of such import that went unremarked on during the game. It wasn’t until I sat down and looked at it that I noticed.

So, happy 1 year of infinity. Let’s get to the battle report.

We had a more open table than I am used to, so this was going to be an interesting game. Picking sides, Xammy gave me the far side below. I had some nice height, but some other places where a bit harder to hide things in. After having picked sides, Xammy informed me that Strategos level 2 was in play. So I would have no reserve.

I put my Hollow Men link over by my two high towers. Three up top, including my heavy weapons, and two down low. I put my Heckler centrally up on a can. My Zondnautica is in the back left. I have my Warcor up on top of the building on my right. My Interventor is one level down behind the Warcors tower, and I have my Kriza on the right ready to run forward. 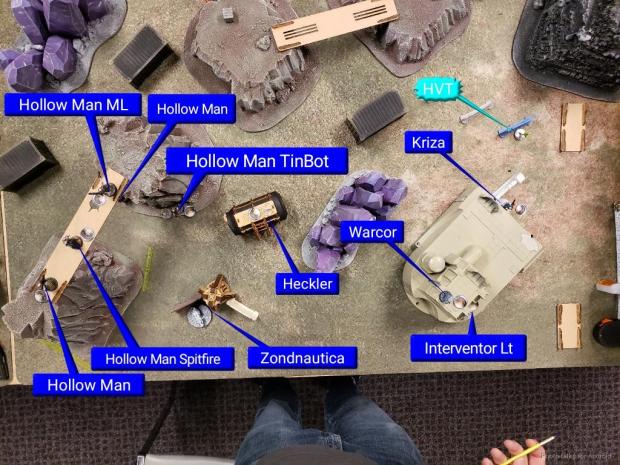 Xammy has his Epsilon up on a building to the left, watching two firelanes. Two Razers attempt to over infiltrate and fail, winding up on the backline left and right thirds. There are two Varangians guarding the mid and right deployment zone. There is an Alpha hiding in the back right. Two Gangbusters were set up on the right side, with their Mad traps, probably to guard against my Hollow Men. 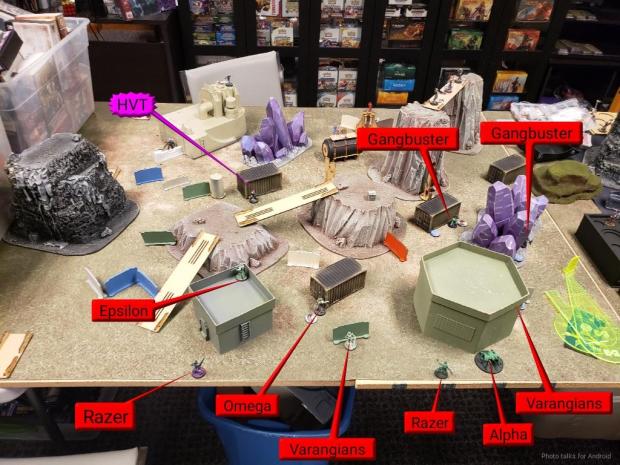 To start things off I have my Zondnautica zip out carefully to blast away a madtrap. Another order and I bring it around to take a shot at the Gangbuster, catching the Mad-Trap behind it. Unfortunately I misjudged the distance, and while I did take out the Gangbuster, my Zondnautica got immobilized. Next up I start moving my Hollow Men up and have the missile launcher take some shots at the Epsilon. I figure that we will be about on the same modifiers and with my two dice to his one, and two wounds I should be able to win this fight and dominate the high ground. The math seems to back this up:

Unfortunately over the course of several orders math goes to Xammy and I lose my Hollow Man Missile launcher. With the missile launcher down I decide that the Kriza will solve my problems, and I walk him up and paste the Epsilon. I then walk the Kriza up more to the Panoplies on my left and pick up a Multi-Rifle. I reform my Hollow Men link and bring the Spitfire forward. That done I pass turn.

Xammy spends a couple orders to bring the Omega forward to be an obnoxious threat. It also takes out my HollowMan spitfire, breaking the link again. With the link broken, Xammy drops in Cuervo Goldstien and takes out another Hollow Man. After a bit more set up Xammy passes turn.

First thing I do is take out Goldstein with the Hollow Man up top. I can then bring my Hollow Man on the ground forward, pick up some extra ARM from the Panoplies and then take out the Omega. I bring the Hollowman far forward to threaten the deployment zone. I then have my Interventor crawl down with the vague idea of bringing her forward to take out a classified. Orders spent I pass turn.

Xammy drops in a Delta and takes out my Interventor. Then the Razers attempt to come forward as part of a coordinated order while in the TO marker state. I have my Warcor and Zondnautica attempt discover. Before my Hollow Man discovers a Razer on my right. The remaining Gangbuster comes up and puts a wound on the Hollowman up top, then retreats back. I have the Hollow Man fail guts out of the line of fire. After some repositioning and re-shuffling he passes turn.

In loss of lieutenant I don’t have a lot of orders to do much. I have my Kriza set up to see down it’s fire lane and take out a Razer. That done I pass turn.

Xammy has his Varangians walk forward to try and throw some smoke. My Hollowman up top puts one into Dogged and my Warcor Stuns the other. The Varangian in dogged walks forward through smoke. Eating several shots from my Kriza’s double action multi-rifle on the way. The Varangian assaults into my Kriza and manages to take him out. Xammy passes turn. With my Kriza dead, the points fall out to a:

This game came down to the last set of orders. Had the Kriza lived I would have had more army points and the game would have been a 6-3 minor victory for me (the Kriza was also securing the HVT). An obvious failure was that I didn’t reveal my Heckler to shoot the Varangian when I had the chance to. An extra shot or two would have maybe been able to bring it down, saving the Kriza.

I think I messed up the positioning of my Heckler. He didn’t contribute during the game other than an order. A suggestion that Xammy had was deploying it near my Lieutenant in order to add a layer of protection. I miss-played the Zondnautica a bit, I was playing tight to the edges of what I thought 8 inches was, and wound up just inside of boost range instead of just out. If it was back that extra inch, the Zondnautica would have been able to continue it’s little rampage across the back field of Xammy’s forces. Another trick I missed would have been splitting the Zondnautica up into rider and Zondmate, to let the Zondmate eat a madtrap while Chain Rifling down more Gangbusters.

A place where I feel frustrated with myself is my commitment to trying to take down the Epsilon with my Hollow Man Missile Launcher. Looking back at the math, it looks like the right choice. The Missile Launcher vs Epsilong was:

And what wound up taking out the Epsilon was a Kriza out of cover:

Looking at what I had available and where it was, I think I made the right choice, but it’s frustrating when what seems like the right choice doesn’t work out. Neither option is bulletproof. Something to think about, ways to clear out a sniper watching multiple lanes like that.

While I like both the Kriza and the Hollow Men Core, I don’t think they belong together in one list. It’s fun, but it also feels like there are not enough orders to go around and get everything I want done. I do look forward to continuing to improve with the Zondnautica and Hecklers. And am excited for the start of another year of Infinity!