Design a site like this with WordPress.com
Get started
Skip to content
Jhokalups Battle Report, Infinity July 26, 2019July 28, 2019 5 Minutes

It’s week two of the escalation league! For this week I was paired against RomanLegion, normally a YuJing player, for the league he is running Ramah. This week was 120 points and Sweep and Clear, which is a mini Quadrant Control mission. After finding out table we rolled for initiative.

This week our table was based off of something like Moon Base Alpha, we had large purple stones in and around the deployment zones, and a small corridor module in the middle. 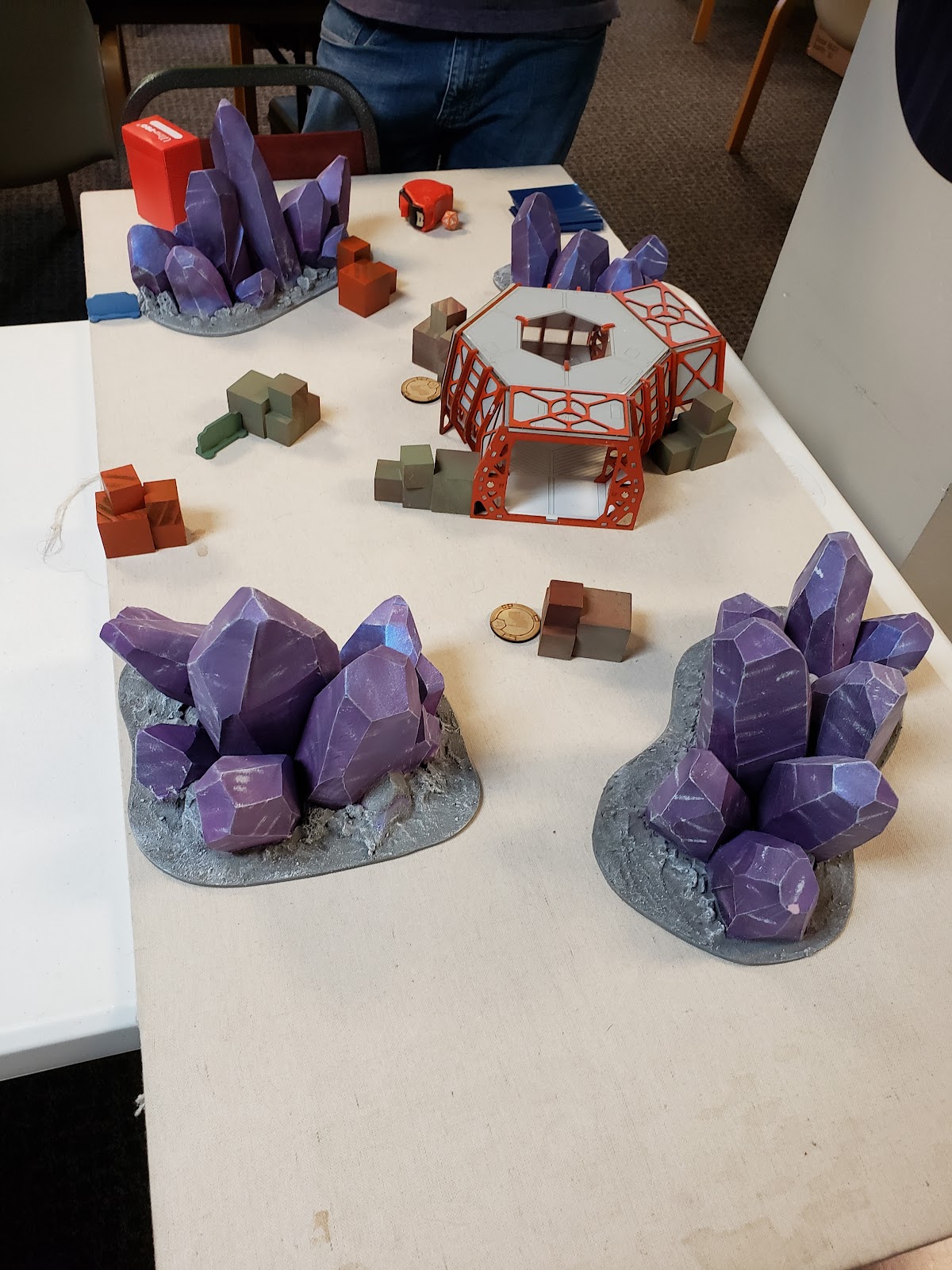 The first thing I deployed was my Spektr in hidden deploy on top of the Moon base. I had my Interventor on the left side behind the rocks. My Hollowman and Securitate were on the right side. And I held the Heckler as my reserver and put it near some boxes by the crate. 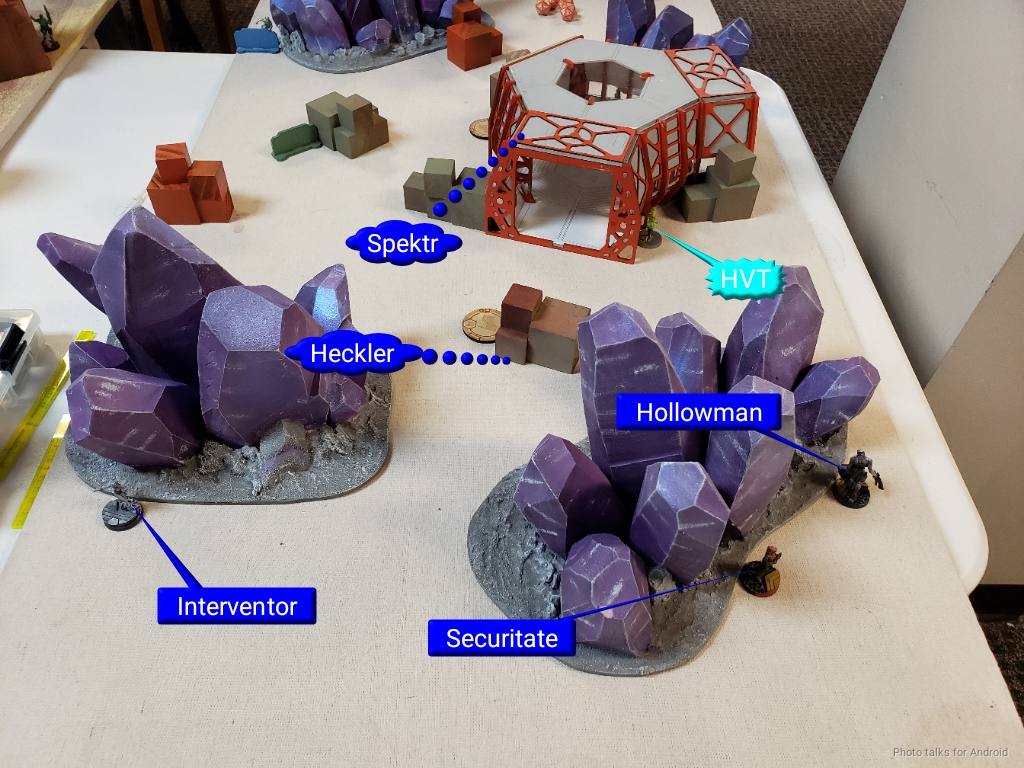 RomanLegion had his Ghulams lined up behind the rocks with the LGL and Doctor on the left side. There was a Warcor out for ARO on his right. The Mukhtar was a reserve and was placed in cover by some crates near the Moonbase. 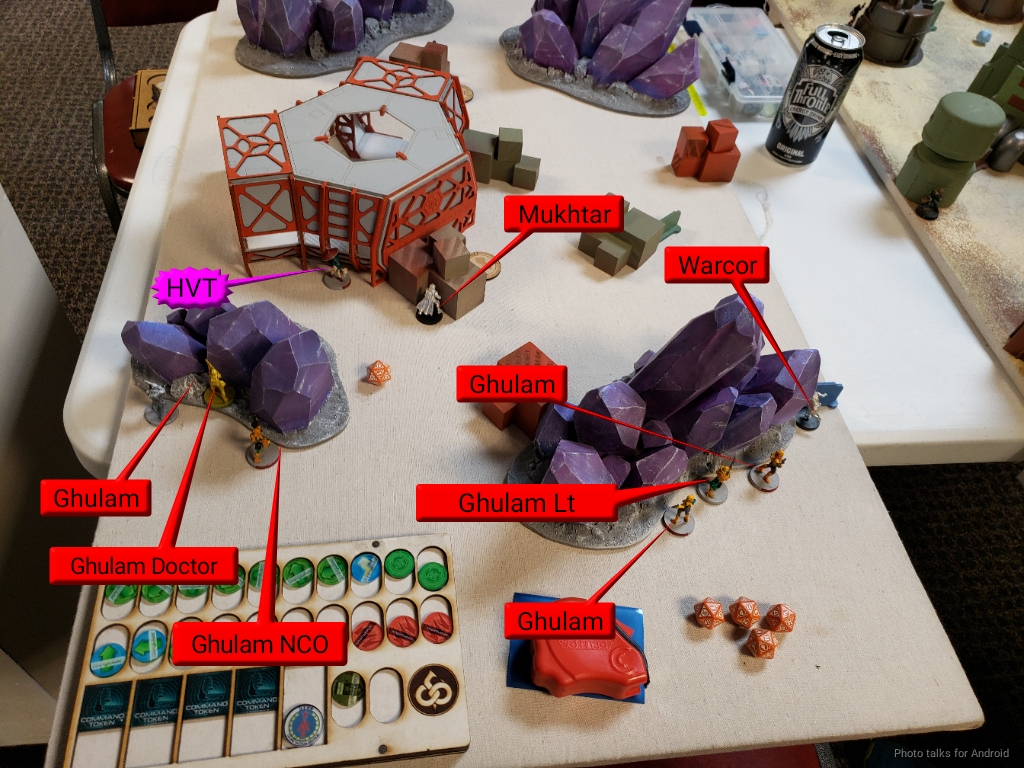 To start things off I have my Hollowman walk forward to the Moonbase, before jumping on top of it. He walks over to a spot and puts four shots into a Ghulam, putting him down. The Warcor successfully flash-pulses the Hollowman and he gets stunned. So I reveal my TO marker and then use a command token to get some distance forward with the Hollowman, Heckler, Securitate and Interventor. The heckler gets revealed on the way. So I pass turn.

The first thing that happens is the NCO goes out to shoot a smoke grenade. After much discussion it is determined that if the smoke hits the edge of a building it will not go over the lip, and if the Mukhtar climbs to the roof it will be visible. So the smoke goes down by the Mukhtar instead and the Mukhtar walks out to see the TO marker. Another order is a discover shoot, so I try and have the Spektr dodge. I fail the Dodge but pass armor so I fail guts to safety. The Mukhtar then advances and guns down my Heckler. Out of orders the turn gets passed. I have control of two zones to his one. So I score first turn.

There are a lot of things in places I don’t like. So I have my Hollowman go around to try and deal with them. A few chain colts from the roof puts the Mukhtar into No Wound Incapacitation. I am unable to finish off the Mukhtar and cannot take down the Ghulam Doc. Out of Orders I pass turn.

First smoke goes down to cover the Mukhtar’s advance. The Mukhtar then circles around some crates in smoke to shoot at my Hollowman, I attempt to chain colt but am just out of range. The Hollowman takes a hit, saves armor and I try to fail guts prone, forcing the Mukhtar to move out. The Mukhtar does and puts my Hollowman into unconscious 2, and the Ghulam Doc comes around to Coup de Gras the Hollowman. A couple spec fires take down my Securitate LT. The last order puts the Mukhtar into suppressive fire. Having two zones to my one, RomanLegion scores.

I am in loss of LT and have only two orders to have the Spektr do things. I spend one to have it walk up and split burst at the Mukhtar and the Ghulam NCO. After the roll, I thought I would need a 3 to Crit the Mukhtar, roll a three, then recheck the math. It’s only a normal hit, so the Spektr will take two saves. The other two shots put the Ghulam NCO unconscious. My Spektr goes down. I have the Interventor killer hacker run up towards the console, am out of orders and pass turn.

The Ghulam doc picks up the NCO who spec fires a couple times at the Interventor before ending turn. Occupying two zones to my one, the game ends in:

I was a bit bad brained for this game. It’s not an excuse for the loss, RoamnLegion beat me hands down. I do think that my mental and physical fatigue affected some of my decisions. I never looked at the actual zones and where the break lines were. So instead of using the Securitate and Interventor to hold my back two zones with the Hollowman up front. I wouldn’t have felt the need to reveal my Spektr so early, and wouldn’t have moved my Heckler. When I had the Hollowman super jump to take out the first Ghulam, I committed to my attack before we realized the Warcor could have flashed pulsed. I elected not to change my choice or the result of the dice we rolled. Which led to the Hollowman be stunned in a situation that would have been beneficial to not be. Had I split the burst I would have had a chance of taking out the Warcor, and a better chance of not being stunned. Having the Hollowman not stunned and able to crawl up to chain colt the Mukhtar could have made a huge difference in the game.

For my Spektr, I definitely revealed too early, and then the only model it could see was the Mukhtar with MSV2 which negates what the Spektr brings. I wish I had paid more attention to zones and kept the Spektr for turn two or three.