Jhokalups – Field Operation Action Report – 10
Bakunin vs Caledonian Highlander Army (CHA)
300 / ITS X – Hunting Party
Finally able to play a game again, it feels like it has been too long. This last week I once again faced off against Sprocketgx, who has been one of my more challenging opponents. This week we tried hunting party, in preparation for an ITS in January. I was trying out Cassandra Kusanagi and Bran Do Castro for the first time. After getting our terrain on the table we rolled off.
Wip Roll
Bakunin – 6
CHA – 3
Decision: Bakunin
Deployment: CHA
Initiative: Bakunin
1st Turn: Bakunin
1st Deploy: Bakunin

Winning the roll, I took a look at the table, and deciding that I liked both sides fairly evenly, that I would like to set the pace for the first engagement, and elected to go first.

Deployment:
Deploying this list was interesting, there are only seven models that are not in a marker state. I had my Reverend haris off on my right surrounding a nice sniper tower. The tower had my moderator lying prone, and I spread my Morlock off on my left flank, rolling Armor, Physique, and BTS with their meta chemistry. My prowlers went on either side of the board, towards the middle. The Zero hacker was in the middle near my HVT. The minelayer Zero placed it’s mine forward of itself in cover, whole being prone in cover further back. The FO Zero was up on a building near the antenna on my right. I held Bran in reserve, hoping to do some damage with him. 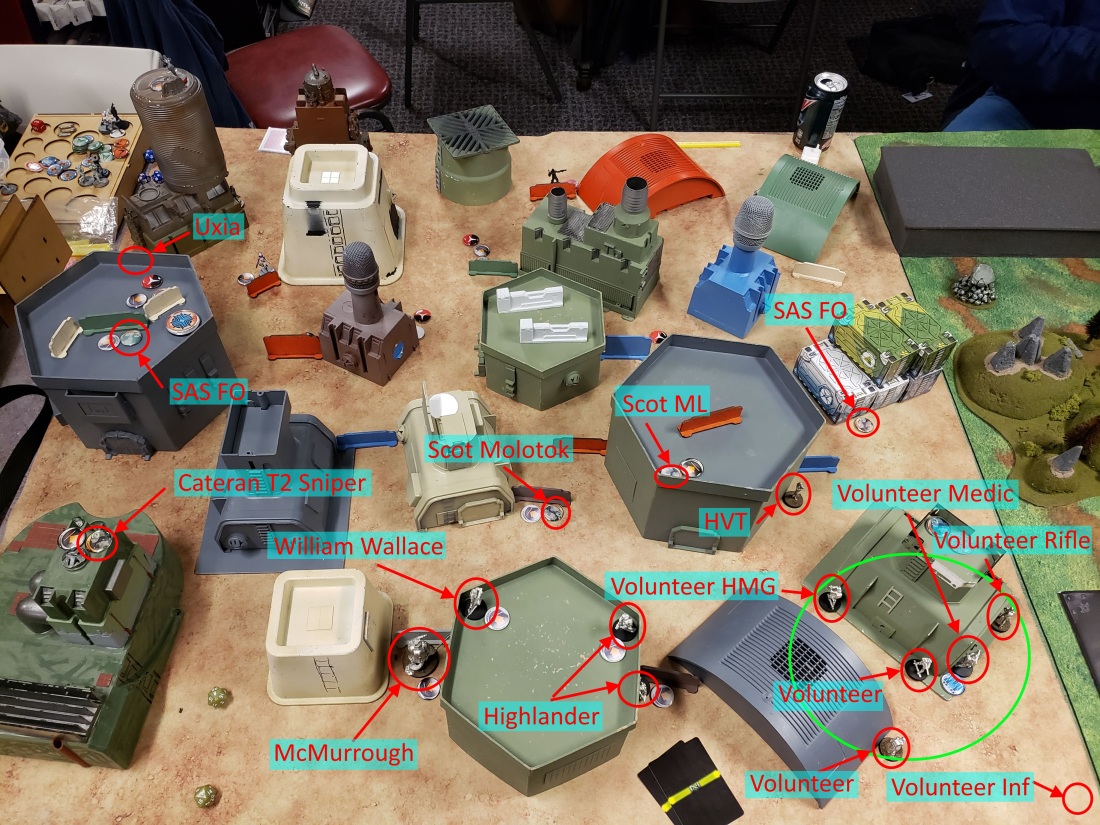 Sprocket brought a lot of Camo markers as well. Wallace was prone up on a roof. A volunteer link was off to the right on his side. The Inferior Infiltrating Volunteer failed it’s roll and walked on near the other volunteers. Uxia successfully deployed near my Reverend haris.

Top of 1: Bakunin
One of our Warcors has been writing about mental fatigue and how a checklist can help reduce mental strain and improve results, soto follow that theme I had the following list.

To start things off, the Morlocks went on a rampage, one advancing and throwing out a smoke cloud, then another double moved, I misjudged the distance and angles and that poor Morlock got plastered by a volunteer with a rifle. The final Morlock moved up just behind the others limp body. In retaliation I moved my left most Prowler forward along the crates, as it cleared them it was able to take a shot on the volunteers, taking the link down from 5 to 4. Another order takes down the infiltrating volunteer that wasn’t able to infiltrate. And then finally the Prowler circles around the boxes to lure out an SAS and then blasts it off the table.
The camo marker close to my Lieutenant was concerning. The healer volunteered to take care of the issue, wandering over to bait out ARO’s from the marker. The marker revealed itself to be Uxia, and after a few exchanges Uxia was unconscious. Next up my Zero FO camo marker crawled towards the antenna and dropped a mine marker (rules flub, cannot drop mines with a camo marker in the trigger area), then walked over to the antenna. An SAS revealed itself, tanked the mine and shots from the Zero. Another attempt by the Zero to deal with the SAS got the Zero frozen. Some orders got Kusanagi into cover, the healer covering a possible approach from McMurrough. Final orders re-camouflaged the Prowler and then a coordinated order moved my markers forward.

Bottom of 1: CHA
Sprocket had a bit of a puzzle on his hands. I have some camo markers up in aggressive spots and doing too much with the volunteer link would risk the wrath of Bran. To start off, the Highlanders took their Impetuous moves towards Bran. Then McMurrough took his towards my Zero up top. After winning a smoke face to face with the Reverend Healer, McMurrough proceeds to start creeping up in the smoke, hoping to take out Kusanagi and the link. McMurrough face tanks the mine bluff. Unfortunately on his next walk he gets an adhesive launcher to the face and gets stuck in glue. Next a Scot wielding a missile launcher popped out of camo and took shots at my Reverend healer. Fortunately she dodged well out of site.
The last group to activate was the fourman link, which was down to four orders. One member starting climbing up a ladder toward Bran, while the others advanced to cover the objective marker. Bran lucked out and the volunteer that made it up failed it’s first discover roll. That left the volunteers without much else to do and so Sprocket passed turn.

Top of 2: Bakunin
Going back to my checklist, so far I haven’t accomplished much on it. I need to capture antennas still. I have eliminated but not hunted down a couple specialists, and have revealed where others are. With my impetuous orders I bring my two remaining Morlocks up. The first climbs a ladder towards the volunteers, while attempting to chain rifle one down, it dodges. The other starts the long climb towards the ML Scot. The leftmost Morlock decides it is time to sacrifice itself to free Bran up. It advances and takes the volunteer standing by Bran out, whole getting gunned down itself. I use Bran to then isolate the volunteer paramedic, and start to play Spider-Man, hiding on the sides of the walls to block line of sight. My other Morlock climbs up the ladder and chain rifles the Scot down. At one point, Bran got Immobilized, so I spent a good chunk (3-4) orders trying to reset him. When he did he went back into Camo. My FO zero stunned the SAS that was by him. And my hacker Zero came forward and secured the left antenna. Also while using it for cover.

Bottom of 2: CHA
With the volunteers down to three members, Sprocket moves the two over to group 1, to fill out orders. Bran, a Highlander, and the volunteers all have a Merry game of tag that ends with a dead Highlander, dead Prowler, and Bran dancing in the sides of a building. Unable to secure any of my specialists the turn is passed.

Top of 3: Bakunin
Third turn, I have captured one antenna, and between Bran, my Zero and isolating the paramedic, there isn’t much to fear about losing control of it. I therefore forces on getting the second antenna, protecting Bran, and setting up a good defense block.
The FO zero successfully knocks out the SAS next to him and then captures the right hand antenna. I spend a few orders trying to get Bran into a good spot to isolate the LT, and then use a coordinated order to move my camo marker spitfire prowler up. With that done I pass turn.

Bottom of 3: CHA
Looking at points, Sprocket needs to hunt down more specialists than me to tie. So that’s what he sets out to do. Fortunately Bran dodges around the building, but my Zero hacker gets glued.
Next up Wallace decides to take a stab at binding Bran, when he stands up to walk the Prowler sends a glue ball omat Wallace, which he easily avoided with a smoke screen. Unfortunately when walking over with the last two orders to take Bran out, Wallace gets tagged by the Prowlers adhesive launcher. Which ends the game. With two antennas, a tie on specialists, no classifieds and one stuck Lieutenant, the Bakunin force takes home victory.